Anterior Cruciate Ligament (ACL) is a common victim of knee injuries. It is particularly vulnerable to twisting movements, such as ones during skiing, snowboarding and playing football. ACL plays a crucial role in stabilising knee joint. Its tear is one of the commonest sport injuries.

The most common treatment is surgical. Surgeon takes a piece of tendon, for example from hamstrings, and place it instead of torn ACL. In as much as good it sounds, the method is not without pitfalls. Let’s take a closer look at them: first of all the graft is made from a tendon, not a ligament. It has different structure and is designed to play a different role in the body. Secondly, due to technical reasons, a graft runs at a different angle than an original ACL. It inevitably affects stability and function of the joint. Many professional athletes are unable to return to their previous fitness for that reason. Thirdly, grafts do snap and another surgery is required. Often followed by another one… Further, there is some evidence that due to distorted knee stability, there is a risk of osteoarthritis acceleration in the future.

Are there alternatives to surgery ?

Yes. In Algocells we perform Regenexx Same Day Stem Cell treatment which is designed to rebuilt original ACL and restore its function. We use bone marrow aspirate concentrate (BMAC) in order to obtain a high number of stem cells which are then precisely injected into the torn ACL. The treatment is followed by a carefully designed rehabilitation protocol which enhances recovery. Although patients often report improvement in pain shortly after the treatment, it takes up to six months to fully restore the ACL functionality.

Ron is a young and fit gentleman who enjoys football, long runs, skiing. Last winter he injured his ACL. An orthopaedic surgeon diagnosed a full tear and recommended surgery. Ron wasn’t keen on surgery and came across Regenexx. He decided to give stem cells a go and in March he underwent the Regenexx Same Day Stem Cell treatment. Before the treatment we reviewed his MRI scans and we were able to spot some intact ACL fibres which convinced us that his tear was actually  partial rather than full. The other thing we looked at on his scans was so called tibial offset. Let me explain: one of the roles of the ACL is to keep tibia (one of the shin bones) in line with femur (thigh bone). When ACL is torn and lax tibia moves forward and is not in line with femur any more, causing tibial offset. The larger the offset the poorer the prognosis. Ron’s tibial offset was large (top picture) as it measured over 9mm. But six months after his treatment his tibial offset is mere 1.4mm (bottom picture). This is a great success and Roy enjoys his sports and hobbies as well as fully functional knee. 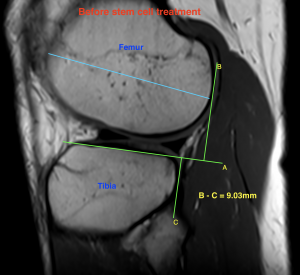 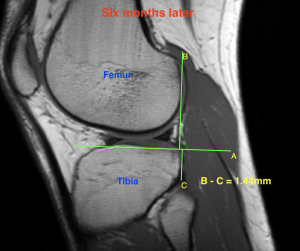 If you suffer from ACL tear, please, consider stem cell treatment. In Algocells we offer state of the art stem cell procedure for ACL tears. We also treat torn ACL grafts. Please, contact us, should you wish to find out more. (ZK)